NEPLAN has a strong support for geo-referenced data and visualization of maps.

Import of geo-referenced data from a geographical Information System (GIS)

NEPLAN has a customizable interface to import and update network data from GIS. The imported GIS data are checked on plausibility for network calculation and reported. The GIS network model could be simplified according to several criteria when imported to NEPLAN. In this way the network will be easier in NEPLAN. This interface is applicable not only for electrical networks, but for gas, water and heating networks too. The NEPLAN web services could be used to implement automatic data exchange with GIS.

We are able to offer you a customized solution, which fulfills best your requirements. 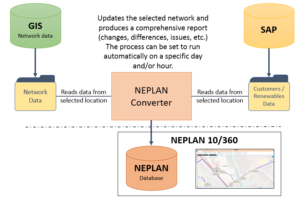 Every point in the geo-referenced diagrams of NEPLAN can be directly shown in Google maps by right-clicking it. The network model can be exported in KML format allowing to open it in Google Earth.

A wide range of maps, like road maps, cadaster plans or infrastructure maps could be displayed behind the geo-referenced network model. Basically any WMS compatible map server can be registered, both public ones and servers running inside the company. For further information please contact us. 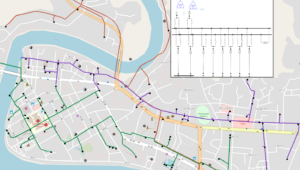 Multi-Window system with map and sub-station 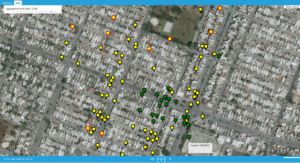 Visualisation of maps with violations in the network